skip to main | skip to sidebar

When I’ve got mine N900, I thought, pity that it doesn’t have Fedora in it. But now, I’ve managed to run Fedora ARM port on it. 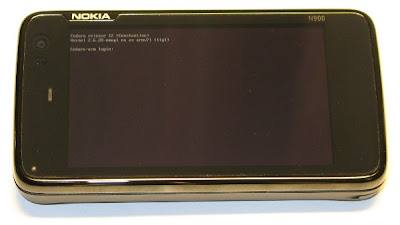 Steps were the following:

To prevent hardware reset by watchdog chip it needs to have chars regularly written to correspondent device. On N900’s board this is /dev/watchdog and /dev/twl4030_wdt. I’ve made simple rpm with config for watchdog daemon and startup script.

Wifi is working “out-of-the-box”. Only script to startup it like this one should be prepared and put to PATH, as there is no way to type anything except english letters from console.

tslib could provide touchscreen support, but to be available in X it needs xf86-input-tslib driver.

To have battery charging it needs to run bme proprietary daemon.


But it is more useful to run Fedora system in chroot from Maemo to have familiar userspace instead of cripple busybox.
Posted by Alexey Torkhov at 16:44 163 comments